The Spider and the Liquid Mirror 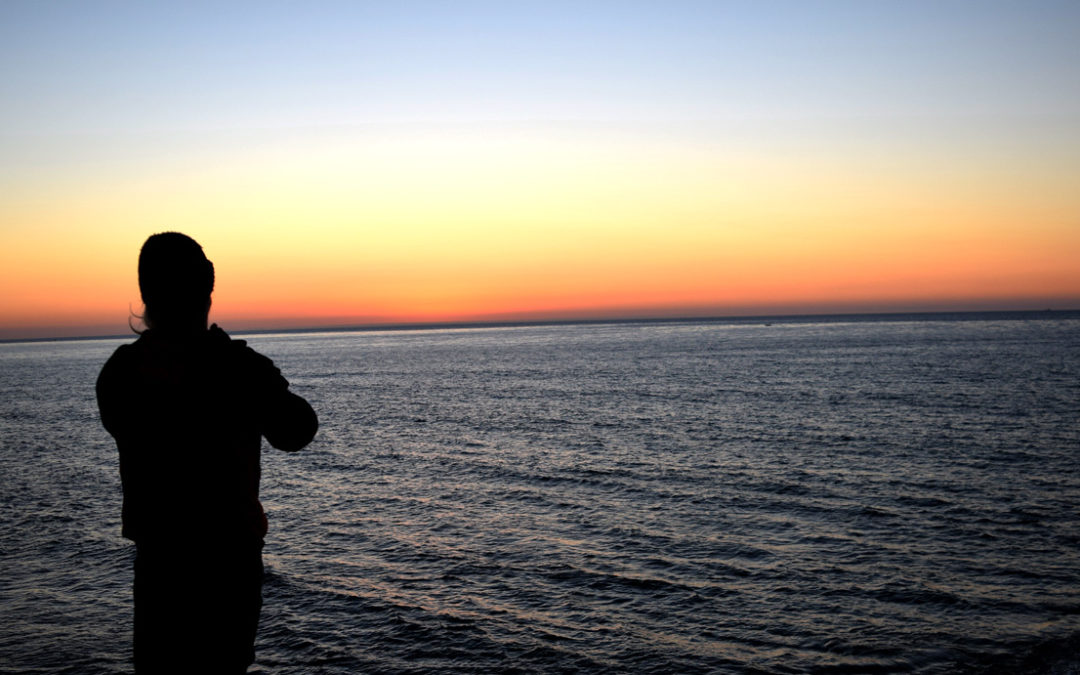 The surface of the water is a very curious and unique place.  From the sky, the water shimmers blue and green and bounces rays of light in a million directions.  From the land, the waves in the ocean turn creamy white with trillions of tiny bubbles and crash onto the shore, slowly pounding all the rocks into sand.  From here, the ocean is a vast and beautiful liquid mirror reflecting the sky.

But, just under the surface of the water, another world is always happening.  The light from the sun is forced to bend just a little bit in order to enter the water – it bounces and shimmers delicately on a sunny day.  But further into the underwater world, there is almost no light.  Sound also has a difficult time transitioning from the weightless air molecules into the dense and heavy water molecules, but once it is under the surface of the water, it moves at incredible speeds.  From the depths of the ocean, all sounds travel from very far away and whiz by as if echoing softly from a distant land.

Bear turned the stainless steel shower know to the right, showing no signs of astonishment as hot water miraculously burst from the shower head.  He pulled back the shower curtains to enter the shower, but saw something there that made him gasp.  A rather large wolf spider was floating around, helplessly drowning in the newly introduced water in the bathtub.  Bear quickly turned off the water in an effort to rescue the spider, but it was too late.  As he fished the spider from the tub with a Q-tip, it was clear that it had succumb from the water.  In less than a minute, this tiny creature had drowned.

Bear thought to himself, “Do spiders breathe?”  He looked closely at its curled legs and water drenched lifeless fangs.  “How could this spider have died so quickly?  Was it aware that a giant deluge was coming?  Did it somehow have a subtle portent, a tiny foreshadowing that its life was coming to such an abrupt end?”  On one hand, he felt responsible for taking the life of this innocent arachnid.  But then the thought crossed his mind, “How could it be so delicate?  Didn’t this spider ever learn how to swim?”

As he showered, he thought of the itsy bitsy spider and wondered if it has drowned every time the rain washed it out.   That would make that nursery rhyme then equally as disturbing as most other nursery rhymes, so he supposed it made sense.

Then, for a moment, he looked up at the water as it streamed out of those tiny little openings in the shower head, and he had an epiphany.  Water was life.  It is water that brought the magic to the earth.  It was the water that set earth apart from every other dead planet in the solar system.  It was water that facilitated the delicate balance of life on earth.  We are made of mostly water, born from a tiny ocean on the womb, and desperately thirsty our whole lives – never able to be fully hydrated.  Perhaps if water is life, then the absence of water is death.

Many would think such line of thought to be a dismal way to spend in the morning shower.  However, as he had been schooled in Tibetan and Navajo ways, contemplation of death was not only valuable but was indeed vital to spiritual health.  Death in fact gives us the mirror through which to see life.   And now, that beautiful mirror of life had become a surface of liquid through which other worlds are born, and he had somehow unknowingly stumbled through the looking glass.

Bear stepped out of the shower and dried himself off, noticing the sun peeking through the dusty windows and thought again of the surfaces that are like bardos allowing only light to pass.  He thought again of the water drenched spider who he had placed delicately on a ball of tissue just moments ago.  The spider lay there motionless in the same position as before, but as he looked more closely, there was a little glimmer of life in it.  He blew on it and noticed its tiny legs trembling.  Perhaps the spider had survived after all.

A few weeks before, Bear had his friend Sara stay in his house while he was traveling.  While there, she had blessed the house with a certain kind of magic.  She bought some plants, sewed some drapes and gave everything a sort of feminine, esthetic glow that had made it all very pleasant.  When he returned, she presented his house which had been transformed from a bachelor pad into a sanctuary, and he was so grateful.  As he was leaving, she said one curious thing that had stuck with him.

“Oh, and I have been talking to the spiders,” Sara had said.  “They are here to bring some female, creative energy to your home.  They will help you.  But they asked me to tell you not to kill them.  They were afraid that you were going to come back and kill them.”

“Ok,” Bear said.  “I’ve never really been too fond of spiders, but I will try to learn.”

Today, this one spider had really taught him something.  As he watched, the little spiders body slowly became animated, spread out its legs and arranged itself back to a normal shape.  Bear lifted up the tissue and the spider gracefully and set them outside on the front porch.  Moments later, the spider crawled off to camouflage itself back in its familiar pile of dirt, leaves and branches.

Bear back inside and poured himself a glass of water.  Looking through the mason jar of water, he saw the light again refracting through it, bending all perception of reality.  He drank the water, felling more gratefully than ever about his precious life.